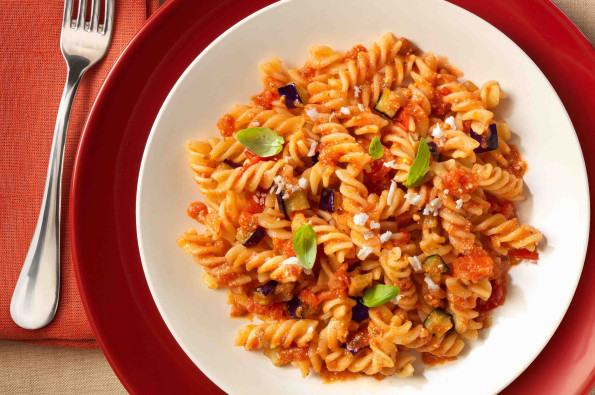 You can use whatever pasta format you prefer, but make sure you don't overcook it, leave it 'al dente' instead!

After such a filling, satisfying pasta we suggest you to serve a green salad or some light side dishes such as vegetables or Parma raw ham.

Grillo for the white wines; Riesi DOC, Valpolicella DOC, Bardolino or Cerasuolo for the red ones; Rosato Salento IGT among the rosé wines.

We recommend using 1 litre of water for every 100 g of pasta.

This delicious pasta is one of the most typical Sicilian dishes! Invented in the city of Catania, where it's called 'Pasta Ca' Norma' in local dialect, the original recipe is characterised by fresh tomato sauce, fried aubergines, basil and a typical hard cheese called 'ricotta salata' (salty ricotta). It's recalled that it was the playwright Nino Martoglio, from Catania who, at the early 20th century, named this pasta after the famous opera 'La Norma' by Vincenzo Bellini: in his opinion, both of them were superb. Ideal in summer, when tomatoes, aubergines and basil are in season. Enjoy!